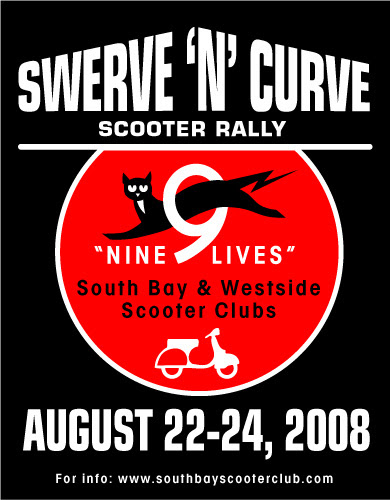 The Friday night ride turned out to be a sweet, long, mini Swerve N Curve route, lead by All Day South Bay Doug. Everyone met at Killkenny's on the Redondo Beach Pier beforehand and Doug ended the ride at Hennessey's in Riviera Village afterwards.

And the South Bay's famous Swerve N Curve route on Saturday, often imitated or outright copied but NEVER done as well, was a blast once more, 80+ scooters strong, ending at the fun venue, Paddy-O's in Torrance. DeeJay-ed tunes were provided by "ON TARGET" DJ's, and a scooter buffet was set up for all the hungry riders.

"Swerve N Ska" on Saturday nite was happening, and Sunday's ride, led by Tank Top and others to Keegan's in Torrance, was a great capper to another SoCal classic rally, which was a huge success.

For pics of the rally, click here and here, or check out the scoot.net gallery here. For a couple of videos by Doug Ewer, click here and here. Thanks to all of you who came out - you are the ones that continue to make this such a great rally, year after year! Be sure to save the date for next year's rally, which will be the Big "X" (Swerve N Curve #10), going down August 21-23, 2009!!!!
Posted by GRX at 11:57 PM