Piaggio debuted the Vespa 946 in North America, a few days ago, on October 25, 2013. The presentation took place in New York, at one of Manhattan's most exclusive shops, the Bulgari flagship store on 5th Avenue.

At the event, Piaggio Group Chairman and CEO Robert Colaninno said, "2013 has been a remarkable year for Vespa. The 946, an exclusive and elite product, is about to be joined by a completely new model to be launched at the EICMA motor show in Milan in early November. Given the style content of this second scooter, we've decided to give it a legendary name, one of the most significant in the history of the world's most famous scooter: Vespa Primavera."

Mr. Colaninno also stated, "The introduction of new models, all of them faithful to the original Vespa design, but implementing innovative style and technology, and the development of new industrial and commercial initiatives around the world are the secret of this exceptional brand's growing success over the years."

(see a short video of the event, below)

In the USA, marketing of the Vespa 946 will enhance the offer of the Piaggio Group Americas division, which, from its head office in New York, markets all the Piaggio Group brands in North, Central and South America. A benchmark player on the US scooter market with a 23.1% share, rising to 36.5% in the over 50cc segment, in the first nine months of 2013 Piaggio Group Americas reported aggregate sales for the Group brands of more than 13,300 vehicles in North America and South America, an improvement of 7.7% from the first nine months of 2012.

Besides its sales division, in the USA the Piaggio Group also has an R&D centre, set up on the West Coast in 2012. The Piaggio Group Advanced Design Centre in Pasadena (California) operates closely with the Piaggio Group Style Centre in Pontedera and the Group R&D centres in Italy, China, India and Vietnam. Its mission is not only to work at the cutting edge of design, but also to follow key research projects in urban mobility technology, with a special focus on engines with low or zero emissions and use of alternative forms of energy.

The international development of the Piaggio Group’s industrial, commercial and research operations is at the basis of the important award Roberto Colaninno received in Washington DC at the 38th Anniversary Gala of the National Italian American Foundation (NIAF), on October 26, 2013. The Piaggio Group Chairman and CEO was one of the Italian and Italo-American honorees at the ceremony organised in the US capital – where other recipients included the former CIA director and US Defence Secretary Leon Panetta – where he received the “NIAF Special Achievement Award in International Business”.

- Information for this article was obtained from Piaggio Group's online press release.
Posted by GRX at 2:41 AM

A scooterists favorite dream: to hop on your scooter, grab your significant other, then ride off into the sunset on a long, long adventure to far away places you've never been before. This is a dream that most scooterists do have, yet few ever actually do.

Well, in November of 1959, one scooterist, named Ron Bowman, actually did. All the way from Canada to South America.

And he did it on a 150cc Series I Lambretta.

Add to the fact that once he got to Mexico City, his soon-to-be-wife joined him on the back of his scooter for this epic journey, and a lot of folks in 1959 probably thought they both should have been committed.


But, this type of an epic journey probably came along with a bunch of great stories. And it did. And now, Ron's son, Gordon Bowman, is trying to get all of the stories related to this romantic and fun adventure published for everyone to enjoy.

But he needs a little help.

He is using the project funding website, Kickstarter, as a way to raise enough cash to be able to publish his Mom and Dad's story of a ride to South America.

But, he's only got until October 20th, 2013, to try and raise enough money. That's the way Kickstarter works: if the funding for a project does not reach it's goal, it does not get funded.

So, I am encouraging every scooterist reading this to throw a donation his way. I, for one, would love to read all of their stories. I'm sure it would be a very fun, and relatable, read to all of us who ride two wheels, whether on a scooter or a motorcycle.

Ron Bowman passed away in 2004. But it's nice to know that his son, Gordon, has been fighting ever since, to get his mom and dad's adventure filled story to all of us. If you can, please fund Ron's story.

Click here for the link to Gordon's Kickstarter campaign, and a cool description of how he came up with the idea to do the book.

Click here for a few excerpts from the book.

The end of June saw AMERIVESPA hit the West Coast again for the first time in over a decade. San Diego was a great choice for the scootering weekend, which happened June 27-30. Here is one of the "official" write-ups for the event:


"The weather was perfect in sunny San Diego for this year’s Amerivespa. An estimated 2,000 Vespa and scooter enthusiasts invaded San Diego for VCOA’s annual scooter celebration. Over the four day event six scooters were raffled off in addition to many other prizes donated from our sponsors.

Thursday’s highlight was the evening meet and greet at Vespa Motorsport, the local Vespa shop and co-sponsor of Amerivespa. About 500 early arrivers enjoyed food, drinks and an art show and a raffle which featured a custom Vespa LX150 to one lucky recipient, Rich Glass of Vespa Club Los Gatos.

Every day would start out with a choice of rides that were led by local scooter clubs. The highlighted ride was the Friday ride across the Mexican border to the seaside town of Puerto Nuevo. It was only a 140 mile round trip, but ended up as an all-day venture as the return trip back across the border to the USA was a slow checkpoint for every scooter. The heat rose to close to 100 degrees, but everyone made it back and checked off “Scooter Ride in Mexico” off their bucket list.

Friday was also the start of the two day vendor show with many of the local and national brands exhibiting their products replete with plenty of giveaways. The show would end on Saturday with the traditional scooter concourse and gymkhana. In the evening, a concert and dance at Town and Country Resort was headlined by the English Beat who provided some great music to dance the night away.

Saturday, the vendor show and concours de elegance continued with the most attendees visiting on the weekend. Our Saturday evening awards and dinner banquet featured a fashion show, stand-up comedy by former owner of NOHO scooters, Mike Frankovich, two scooters raffled and music from the Inciters. Mike Bobadilla announced that he was resigning as president of VCOA and that the new president would be Jac Carolan from New Orleans.

Sunday the final ride was to Paradise Point for our closing raffle and BBQ. Our party was curtailed quickly by the park rangers who called in the local police for reinforcements. It seems someone forgot to secure permits. “Oops!” We were asked to leave the grounds. No problem. Everyone got back on their scoots and reconvened at Vespa Motorsport. Our version of a moveable feast moved quickly to our improvised location. The final BBQ and raffle was completed and another Amerivespa was completed. Next year Amerivespa returns to New Orleans. Hope to see you there!"

For the "official" pics from AMERIVESPA, click this link.
Posted by GRX at 10:05 AM

As reported on ScooterFile.com, by Eric Almendral, the pricing and release date of the much anticipated Vespa 946 has been announced.

Much has been said and debated about this model (including whether or not it will be 125cc or 150cc in the U.S.), but, basically here is the lowdown:


It seems that all indications are now pointing to this being a limited edition run, specialty scooter, as it is not expected to replace the LX model line. A new LX, or other mid-size scooter model, is supposed to be coming out, and may be revealed this coming Fall.
Posted by GRX at 10:13 AM

Vespa scooters are a milestone in the 2-wheeled world with their iconic design which is as simple as it is unmistakeable. However, their classic attire can be transformed into something new, with a character so striking and unique that it really makes us gape in awe. And the Guardian, Pulsar Projects' steampunk Vespa is such a scooter.

Created by sculptor Cris Cofitis, the Guardian is anything but the Vespa we expected. With a painstaking care for the minute details, Cris has managed to create a scooter which resembles more to a sculpture on wheels.

What's even more striking is the fact that Cris Cofitis was able to retain all the vintage character of the Vespa, with its massive apron and fat side covers, while at the same time leaving absolutely no part unmodified.

This steampunk bonanza is even more alluring because of all the stylish details: far from simply loading all sorts of brushed metal parts and bolts on the basic scooter, Cris has made full use of his expertise as a fashion designer to carefully trim everything into place, maintaining a wonderful balance between art and mechanics. 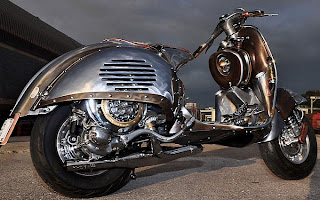 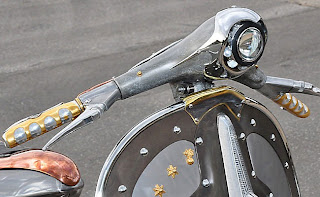 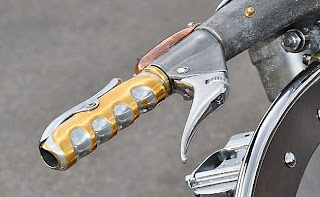 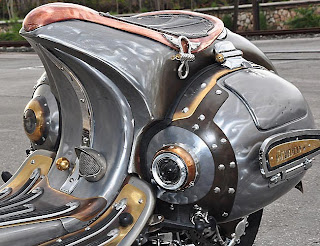 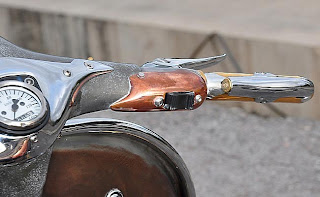 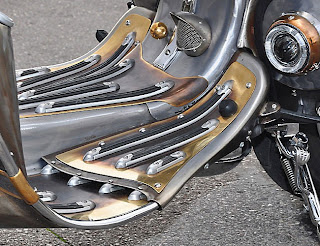 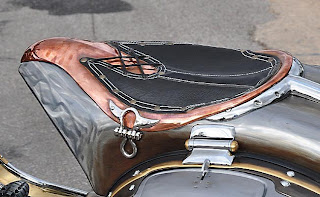 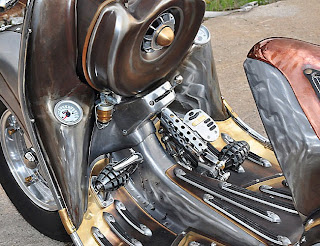 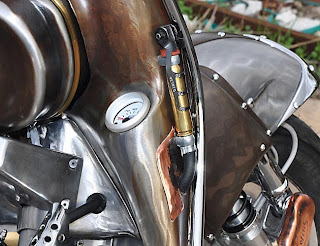 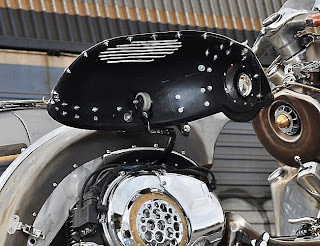 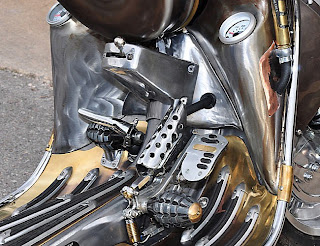 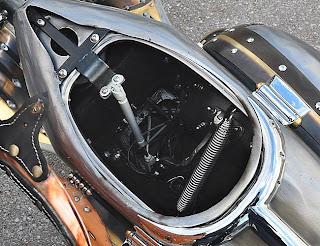 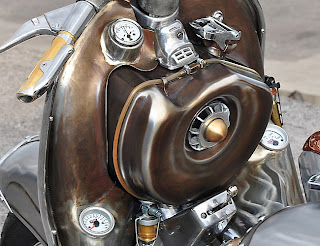 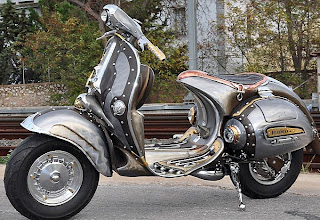 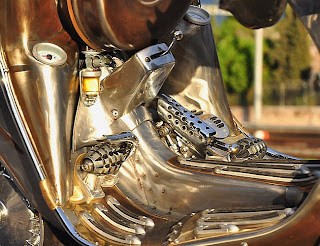 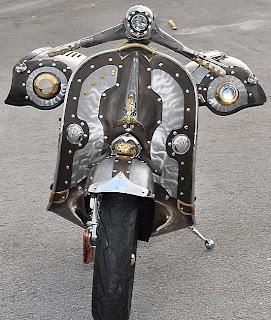 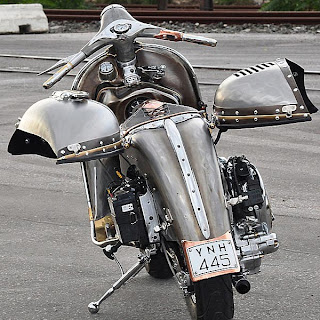 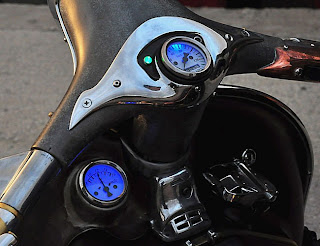 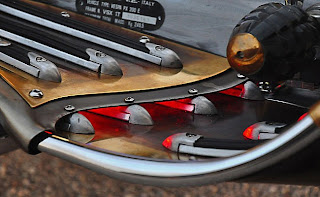 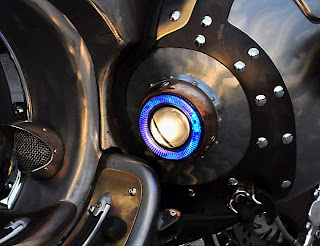 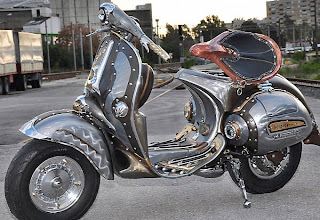 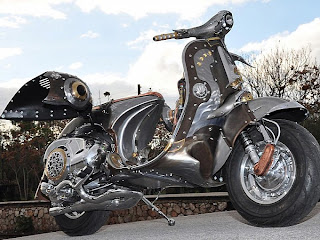 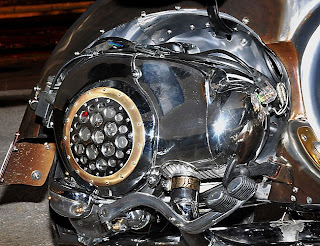 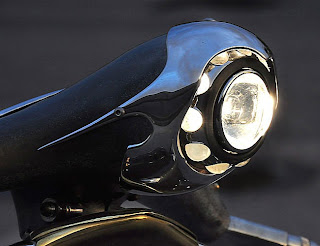 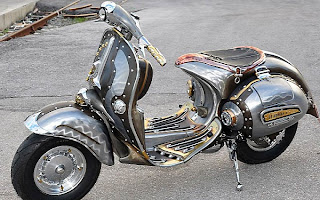 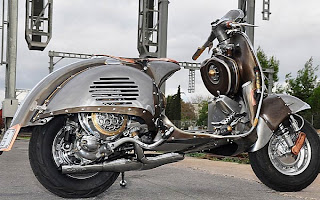 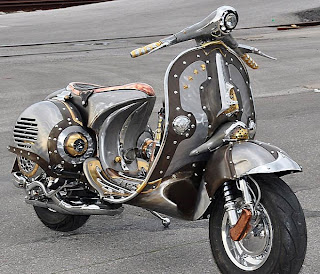 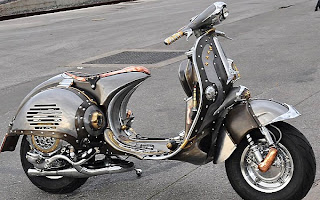 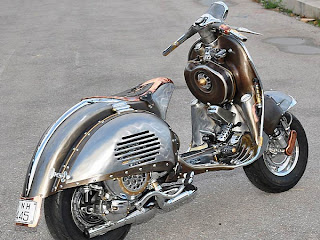 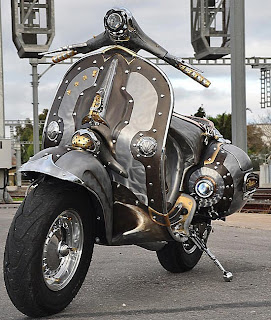 So far Piaggio only sells the Vespa LX125 in India, and this automatic transmission scooter is quite expensive in comparison to other similar vehicles. That's why we (and Indian customers) will most likely see more models rolling out from the Vespa factories.

Ravi Chopra, chairman and MD for Piaggio Vehicles hints that the company is looking for way to increase the sales figures up to the 100,000 bar. The production capacity is now 150,000 units a year, but Ravi Chopra hopes to see it growing by October.

At the same time, new variations of the Vespa scooter are being considered, a sporty one and a more widespread presence of disc brake-equipped vehicles being only some of the objectives.

Considering that only 25,000 Vespas sold since the LX125 was launched in India (April 2012), these plans may seem a bit too confident, but considering the immense Indian market, we might see an interesting development in this direction

Original source: the autoevolution website
Posted by GRX at 11:47 PM